While in Baltimore for work...... I had to take a break and see at least a few of the sites. Read on!

Baltimore is not a city I ever thought I’d frequent on a regular basis, primarily because I am a Pittsburg Steelers fan and the Raven’s organization just casts a bit of a pall on the area. However, after my last weekend I am certainly considering going back sooner rather than later, because the sheer number of things to do is simply staggering!

Let me back up for just a moment to provide some background for my trip. I found myself in Baltimore in order to attend the Glazier Coaching Clinic in the Marriott Renaissance Hotel in the Inner Harbor. For three days I had the pleasure of listening to a wide range of guest speakers on topics ranging from film breakdown, blitz packages, coverage schemes, defensive lineman drills, and all manner of other football related topics. I met some great college coaches, a coach from the Ravens, and plenty of other great members of the football community from all levels. It was a good time to be sure, but I am pretty sure you read the Wandering Prof to hear about the wandering – so now that you know why I was in Baltimore, let’s get to it!

Baltimore’s Inner Harbor is much to big to explore in the downtime I had between clinics, but I did manage to check out the World Trade Center building and the Baltimore Aquarium, both of which are big-ticket stops for the many tourists that pass through the area.

Speaking of the 27th floor, the elevator headed to the top moves at an impressive speed, covering the 429 feet from the ground floor to the observation floor in about 24 seconds. That equates to about 17.9  feet per second – about 12.2 miles an hour. While that is nowhere near the fastest elevator around, when compared to a normal elevator puttering along at 5 miles an hour, this elevator will put your stomach in your shoes if you aren’t expecting the sudden rush.

The panoramic views of the city are a marvelous sight to take in, and the staff are more than happy to give you a tour of the skyline – which was exceptionally helpful as I was looking for places to go. This first thing you will notice during the tour are the windows, which are etched with the names of each individual lost in the September 11th attack on the World Trade Center in New York, with indented names for those from Maryland. Although a sad sight indeed, it struck me as a perfect place to memorialize those individuals over the Baltimore skyline.

Some of the sites that were most notable included the location were Francis Scott Key wrote the Star Spangled Banner, the location of “The Horse You Rode in On” (a saloon continuously operated since 1775 and the last stop Edgar Allen Poe made before he was 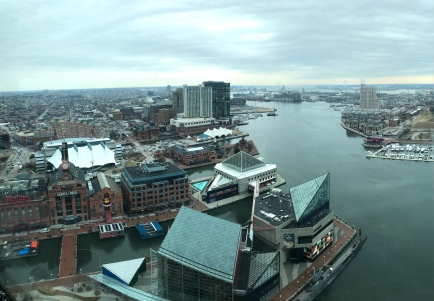 More Skyline – including the Baltimore Aquarium and Hard Rock Hotel

found dead in the street), the birthplace of Babe Ruth, and of course Camden Yard – home of the Baltimore Orioles. The Ravens’ stadium can also be glimpsed from the observation deck, which is ok if you are into that sort of thing. The tour guide also gave me some background on the World Trade Buildings, indicating that every port in the world that engages in international trade has their own trade center that acts as an office building for the trades that take place. This time of year can be pretty cold in Baltimore, and the Inner Harbor had actually frozen over the previous night, which was a pretty cool sight to see from above – the most interesting sight were the birds simply walking across the harbor waters. The guide indicated that it was fairly rare for the entire harbor to freeze over, so I made sure to grab a few pictures before I headed on to my next stop at the Baltimore Aquarium – but before you read that post, check out the rest of my pictures below!

We’d love to hear from you, and we’d love to read your blog even more – leave us a comment and give us a follow!