Day 4 in Iceland included 4 waterfalls, some glacier hiking, and an hour or so on the black sand beaches. Join us!

Day four on our trip took us from the beaches and caves of Snæfellsnes in the north to a new collection of waterfalls, beaches, and adventure along the Southern Coast. After an early pickup from a bus stop near our hotel, we journeyed down the Ring Road towards Seljalandsfoss – the first waterfall of the day. The big draw at Seljalandsfoss is the ability to encircle the waterfall and see the countryside from behind the waterfall. 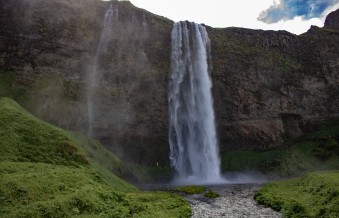 It was a fairly busy spot, but not so busy that you couldn’t enjoy it.  From a distance you can see how the waterfall covers the 200 feet from top to bottom with many different streams of water, and the wind can whip the water in many different directions, usually producing an ever-shifting rainbow in the process. As you near the falls, the roar of falling water is somewhat deafening, while the cold spray that seems to come from everywhere is, at first, somewhat of a shock. However, as you round the waterfall and begin to see the world from behind the falls, the bothersome spray is quickly forgotten, and a more interesting viewpoint takes over. 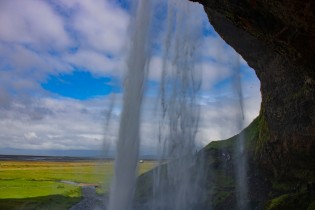 Behind the falls, the darkness caused by the overhanging rocks play tricks on the camera lens but still allows for some interesting photos, provided you are willing to risk the fine mist. Our driver was kind enough to snap a photo of the three of us here, and I must say she did a pretty good job. A few pictures later, and we scaled our way out from behind the waterfall and back into the light, ready for the next waterfall of the day: the legendary Skógafoss. 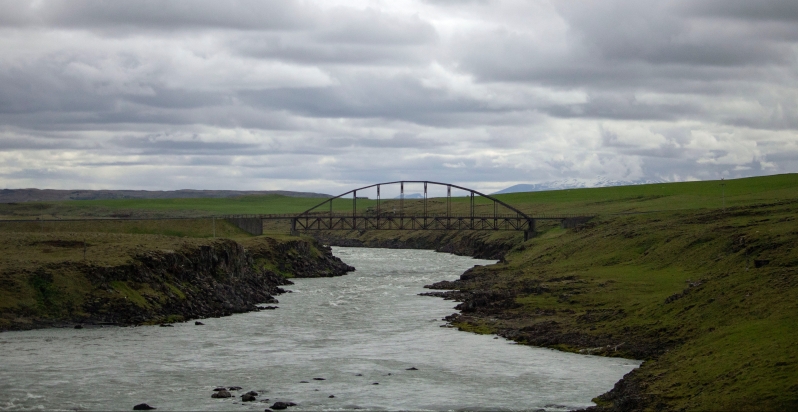 Just another view from the drive….

The trip from place to place in Iceland is often poorly mentioned in the blogs I’ve read, and to be fair I don’t know that I have described them well enough myself. I will say that the southern portion of the Ring Road that we took between Seljalandsfoss and Skógafoss was some of the most beautiful country I saw on the trip. Unlike the barren country that we saw in the northern peninsula of Snæfelsness, the southern Ring Road is dotted with small towns, houses, and the ever-present sheep amidst the rolling foothills. The backdrop varies from coastal vistas on one side of the road to the glaciers and volcanos that forebode the inhospitable inner country on the other. While much of a wanderer’s trip focuses on the destinations, Iceland is as equally fantastic for its in-between places as it is for the locals most often photographed, and the trip to Skógafoss was no exception to this rule.

Skógafoss is special for two reasons: first, because there is a legend that there is treasure hidden behind the falls somewhere, and a ring from the treasure chest is supposedly a door handle on a nearby church. Secondly, it is a special place because it forms part of the barrier between the costal lowlands that are typically inhabited, and the interior highlands, which typically aren’t. Central Iceland is as inhospitable as it is beautiful, and on our short trip I knew that this would be my only other glimpse into the interior besides the diving I did in thingvetlir. As soon as we arrived, I grabbed my camera and started the trek up the right side of the falls where the Fimmvorduhals trail begins. Following it takes you into the Landmannalaugar and onto the Laugavegur hiking trail – sadly an adventure I didn’t manage to pull together on this trip, but maybe next time. A quick climb up the 370 steps brings you out at an observation platform 197 feet from the bottom of the falls. Crossing onto the trail lets you walk up the river Skoga, but in order to make it to lunch I didn’t go too far – there isn’t anywhere to stop for a snack on that trail unless you walk for a day or two… So back down to the falls I went, met up with the wife for a photo or two, and then we went to lunch at the Hótel Skógafoss Bistro & Bar for “lunch with a view”. 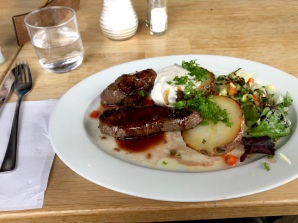 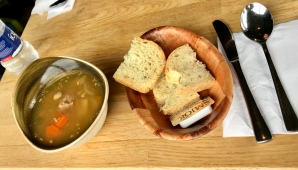 I hadn’t had a steak in a week or so, so while I went beef, Kess went with the Lamb soup – a staple of Icelandic restaurants everywhere on the island. Both choices were phenomenal, and adding to the atmosphere was the ever present World Cup excitement that was present everywhere we went, and the few TV’s at the bar were all tuned into the action. 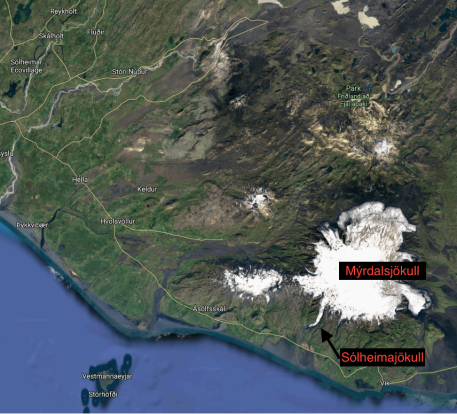 After a short lunch we hit the road again, this time for the highlight of the day – hiking the Sólheimajökull Glacier. For the geographically curious, Sólheimajökull is part of the much larger Myrdalsjökull glacier that rests atop the Katla caldera.
Katla is one of the more active volcanos in Iceland, and our guide informed us that it regularly erupted violently every 50 years, and it currently has not had a major eruption since 1918 – so it’s about 50 years overdue for a good one. Next door to Katla is the infamous Eyjafjallajökull volcano that erupted back in 2010 and shut down air traffic for a while. 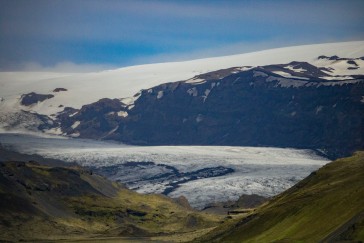 Geographically speaking this glacier is situated in an exciting environment, so I felt we needed to climb it. It was a wild experience climbing the glacier, mainly because I thought it would be cold, snowy white, and slippery. 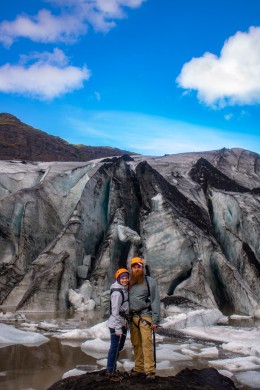 In fact, the glacier was fairly dirty from the ash and soil that are released as the glacier melts (thanks to increasing global temperatures), the ambient air temperature wasn’t very cold, and the crampons we wore provided excellent grip, so slipping was never an issue I had to deal with. We spent quite a while on the glacier, and I won’t soon forget the sound of ice crunching underfoot with each step, nor the bluish hue of the fissures that seemed to appear from nowhere and descend into the darkness with no apparent bottom. The further up the glacier we went, the cleaner the ice got, but relatively speaking it was still fairly dirty. There were streams of glacial melt flowing in grooves along the path, and we stopped to have a drink here and there where the ice was clean. As long as the glacier has been there, there is no telling how long it had been since that water had initially frozen, but it was some of the best water I have ever had. Pausing at the top, our guide told us that in the past few years the glacier had retreated over a mile, and that they were not sure how many more years it would be safe to offer hiking excursions due to the increasing rate that the glacier was melting.

According to her, many of the glaciers in Iceland are rapidly retreating, and they may very well be mostly extinct in the coming decades. At the top of our hike we took pictures and wandered around, looking at the various sculptures the wind and rain formed in the ice, talked with some of the other hikers, and then began the trek back down, which seamed much faster than it should have.

Once we left the glacier, our next stop for the day were the beautiful basalt columns and black sand of Reynisfjara. A short trip to the beach allowed us to eat a snack while

watching sheep run around in the fields by the road, and as we approached the coast line revealed beautiful islands and the mystery that goes with the dark waters of the North Atlantic. Thankfully, the beach also has a café, and before walking out in the sand we stopped for a cup of coffee and to sit a while at one of the tables overlooking the sea. Locals and tourists alike seemed to be in attendance, and although the beach was busy, a two minute walk in either direction from the café would plant you firmly on your own. The black sand was smooth and fairly easy to walk in, not quite as sturdy as gravel, but nowhere near as soft as the sand here in the States. Where the tide reached, the black stones glittered in the sun, while the dry pebbles beyond the water’s reach provided an inviting place to rest.

In addition to the black sand, the towering basalt columns that march almost right down into the sea are breath-taking in both their enormity and the myriad of shapes they find themselves in. As with every location in Iceland, legends here explain the formation of the Reynisdrangar sea stacks as being trolls that didn’t make it back underground before daybreak, and so they were turned to stone. In contrast to the mythical sea stacks, a theory grounded more in scientific research was used to explain the origin of the basalt columns: Volcanic activity. 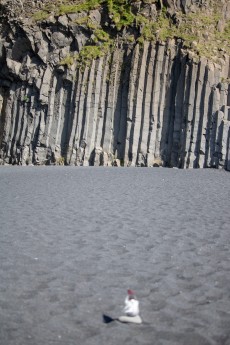 The columns stretched well above us and looked like they had been individually chiseled into the stone, and indeed there are some legends, such as the Giant’s Causeway in Northern Ireland, which suggest individual handiwork as the explanation for the magnificent structures. While they were difficult to photograph and still get an accurate sense of their immense scale, I honestly spent more time looking at them than I spent thinking about a good way to take their picture: they were that impressive.
As we loaded up from the beach we thought we were done for the day, and planned on taking a nap on the way back to the hotel, but our driver had other plans in store. We booked our guide through Nicetravel Iceland on the recommendation of the tourism department in downtown Reykjavík because they were known for adding in extra stops, time permitting, to their tours. Sure enough, we got two

more waterfall stops in before calling it a day. The first took a little bit of a hike to get to, but the hidden falls of Kvernufoss were more than worth it. As an added bonus, the falls had some four-legged visitors while we were there, so we got to have some up-close time with the local sheep. Of all the falls we saw, this one was the most exciting, because we were the only group of people there. According to the  guide it isn’t a frequented stop because of the terrain you cover to get back to it, but it was more than worth the walk to me.

The last waterfall was equally as awesome, but in order to see it you had to climb from rock to rock along a small opening in a cave in order to enjoy the falls, which came in through a hole in the roof of the cave. Both gave us an opportunity to get a little wet, but it was more than worth it – which seems to be the overarching theme of our trip to Iceland: you may have to walk a bit, it might be steep, there may be a mist in the air, and sometimes there will be other tourists about, but you better go ahead and slog through it because the view is always going to be worth it.

Feel free to drop us a line and let us know what you thought of the day trip, and here are a few more picture from the day – enjoy!